Curly Sue, or the Homecoming Queen Who Never Was

Although some might think it's a sign of insanity, I've made a practice of listening to the fabric, to hear what it wants to become.  Part of this process involves letting it rest on my design table, catching my eye while I'm working on another project.  Frequent sightings of it plant a design seed in my mind, where it can germinate.  The fabric will often pop into my conscious thought process hours or even days later, when I have time to focus on designing the garment in my head, and put it on paper.

Another aspect of the "listening" process is to touch the fabric, drape it, study how it behaves in my hands.  Is it fairly stiff, with lots of body that will hold up well as a tailored garment?  Is it soft and fluid, appropriate for a drapey top or pants?  If it's a knit, do the edges curl, or do they lie quite flat?  These are just a few of the questions I ask the fabric.

Curly Sue is a fabric that fooled me.  I purchased it online, which is always a gamble, because until you hold it in your hands, you cannot know exactly what you're buying.  I knew I could ask for a swatch of it, but I'm impatient, and I liked the color and fiber content (cotton/polyester blend), so I ordered it.  The weight is thick like a double knit, but it is actually a jersey.  I liked the dark charcoal on the right side, and lighter gray on the reverse, thinking they would work well together to create a basic garment that would mix well with other items in my wardrobe.  The knit edges did curl, but the fabric was sturdy and seemed like a good candidate for the vest I had planned for it.

Once I began working with the fabric, I discovered Curly Sue had life-long aspirations of becoming the homecoming queen.  She was tomboyish rather than glitzy-glamorous, but that didn't stop her from perfecting her wave.  Visions of riding down Main Street on a colorful float, or on the back of a shiny convertible, dressed to the nines and waving at hundreds of adoring onlookers, obsessed her.  And once she learned she wasn't going to be the homecoming queen, she continued to wave, just to spite the world.  Here she is in her finest form, after I top stitched all the seams and narrow hemmed the bottom of my vest: 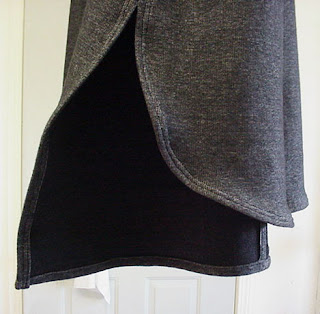 I had failed to honor the fabric, so my other mantra kicked in, and I ripped out lots of stitches.

But, back to the beginning.  The inspiration for this long vest was a button that had recently come into stock at Sawyer Brook, which I named Tatami:

The texture and pattern in this cool metal button cried out to be worn by me on a vest (yes, I listen to buttons, too).  I found a remnant of a silvery gray rayon/wool blend in my stash (also from SB) to use for trim.  I was surprised that it didn't shrink at all when washed in warm water and dried on low heat.  Sometimes you don't know how a fabric has been pre-treated before it gets to market.  Anyway, it was good news, as it made the entire garment easy care.

I painted some of the silvery fabric with Marcy Tilton's Riffle silk screen, using black Neopaque fabric paint.  I liked how the lines in the silk screen pattern echo the lines in the buttons.  I used both the plain and painted fabric for trim on the vest.  The body is cut on the reverse side of the jersey, and the darker side is used for trim. 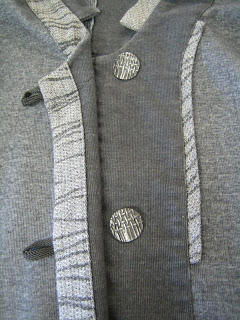 I used a princess seam jacket pattern for my starting point, and added contrast bands and a pocket. 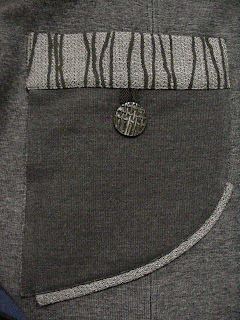 I love asymmetry in a garment, and achieved it here with both rounded and squared edges at the shirttail hem. 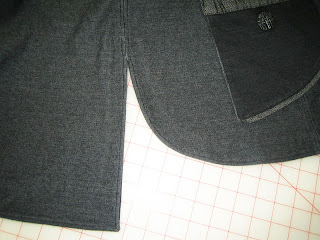 To tame the curly hem, I resorted to facing and hand-stitching it in place.  This helped a bit, but Susie still gets a wave in when she has the opportunity. 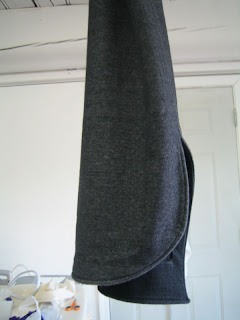 Uneven neckbands also add some asymmetry.  These are not interfaced, and cut on the bias.  Next time, I'll probably cut the bands on the straight grain and interface them, as they wave a bit (must be Susie's influence). 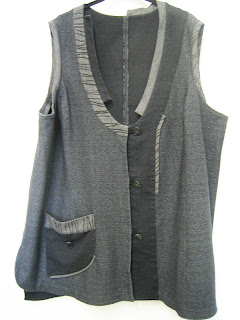 I added some nifty details to the back, and I inserted flanges into the armholes. The front neckline is cut quite low, which I really like with the asymmetric bands and strips of trim. 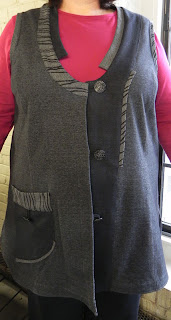 (Sorry for this poor picture.  My photographer friend is much shorter than I am, and she was aiming up at my chest.  I am not really this busty!)
There are some unwanted stress lines that indicate some fit issues, and Curly Sue rules the lower front edge and sides, but the vest is very comfortable to wear, and I know I'll wear it a lot.  I made this in March and wore it only a few times before the weather became too warm for it.  I'm looking forward to using it as a comfy second layer in the fall and winter.
I still don't know what garment Curly Sue wanted to become.  Pants, maybe?  Although, her stretch recovery isn't great, so I envision bagging knees.  A garment with raw edged hems would have been another option, although they would curl up a couple of inches, which might not be all that flattering.  Any ideas?

PS  Anyone know of a used plus size dress form for sale?  I really need to get one.  It will make for much better design work, as well as better photos.
Posted by Dixie at 9:37 PM 2 comments:

Dixie
Massachusetts, United States
My grandmother taught me to sew when I was 12, and creating clothing has been a passion ever since. She also taught me to knit, but I was impatient and quickly gave it up. It wasn't until mid-life that I re-learned to knit, and my yarn stash now contains more fiber than I will be able to knit in my lifetime. Color, embellishment and design are key elements in my creative endeavors. I learned to paint fabric with silk screens a few years ago, and I enjoy playing with paint on some of my garments. There is always a new project design in my head, even if I never get around to creating it in the physical realm!